Udder Success: How Milk Made a Stunning Come Back

Thirty years in the marketplace, a simple strategy, milk deprivation, gave birth to one of the most iconic advertising campaigns in the history of advertising. Got Milk? was the brainchild of San Francisco's Goodby, Silverstein and Partners, Jon Steele. The campaign is a cult classic. Got Milk? dominated the all-powerful television medium with its unusual creative backbone.

What is it about this campaign that commanded attention regardless of age, gender or socio-economic position? Regular people, with all their longings and obsessions, are reminded of how bad the world would be without milk. Can you imagine pouring apple juice on cereal or dunking cookies in iced tea? Got Milk? worked for simple reasons. It was relevant and meaningful. It was entertaining. It was different, hitting home with its key message that drinking milk was cool. Note – not GOOD for you. COOL.

Milk once dominated the beverage business. It was fresh, natural, readily available, and affordable. Its only competition was orange juice and tap water. Focused on the supply side, the industry became complacent and put the business on autopilot. Times changed. More women began working outside the home, families were eating out more often and people were experimenting with other beverages. Fewer meals were served at the kitchen table and milk was one of the casualties.

The industry also ignored two little companies: Coca-Cola and McDonald’s. Coke was focused on making its soft drink the number one choice of consumers around the world, while McDonald’s launched the fast-food war, diverting hundreds of millions of meals away from the kitchen counter to the restaurant counter. People were not likely to drink milk while wolfing down fries. The competition for “share of mouth” was heating up and milk was losing. 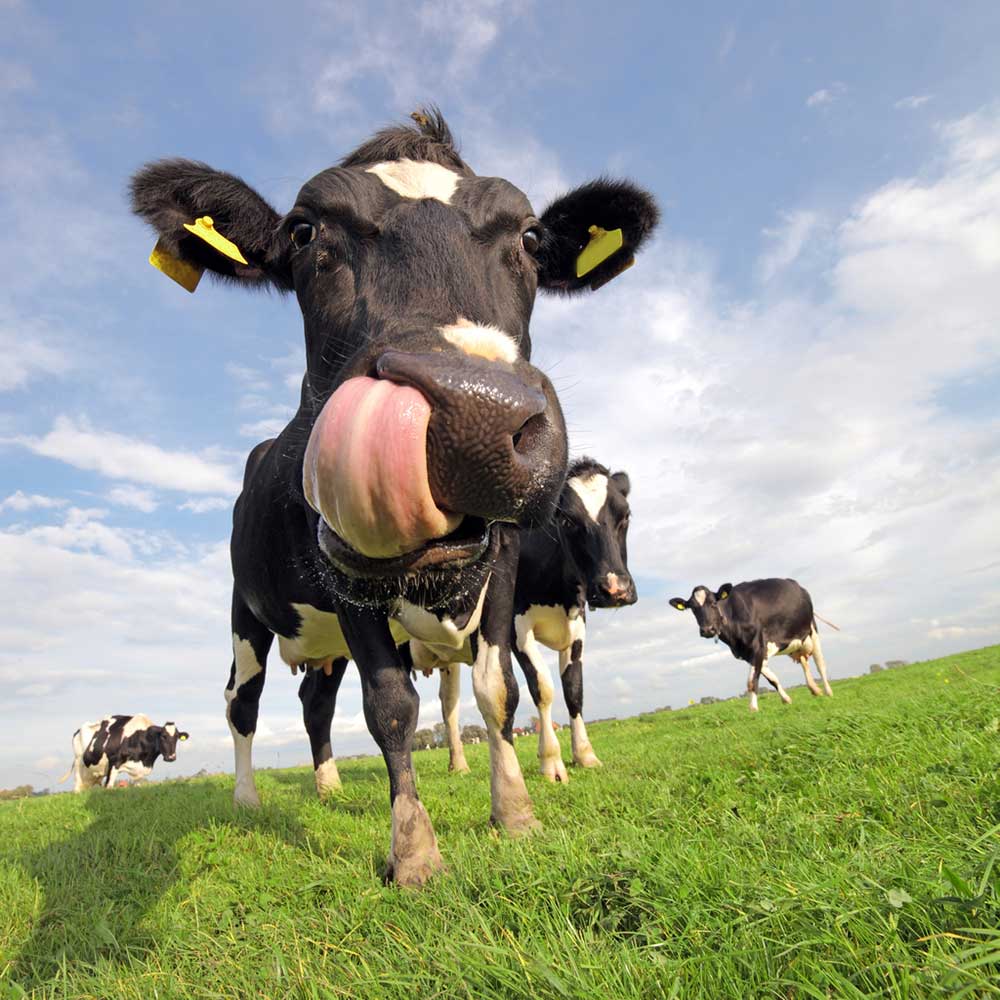 In 1993, the milk processors of California took charge of their destiny and formed the California Milk Processor Board. The board was tasked with finding an advertising agency to create a campaign to increase Californians’ milk consumption.

Goodby, Silverstein & Partners in San Francisco won the account using just two presentation boards and a raw, uncut video. The boards read “Milk Deprivation” and “Got Milk?” The video showed the agency’s refrigerator emptied of milk. A hole was cut in the back wall and a camera was installed. Dozens of people who started their day with cereal were left stranded without milk. Dozens more, mouths full of cookies or brownies, found that their afternoon snack had been destroyed. Reactions ranged from surprise to disappointment, anger, and even temper tantrums. At the end of the clip, the “Got Milk?” tagline appeared and a star was born. 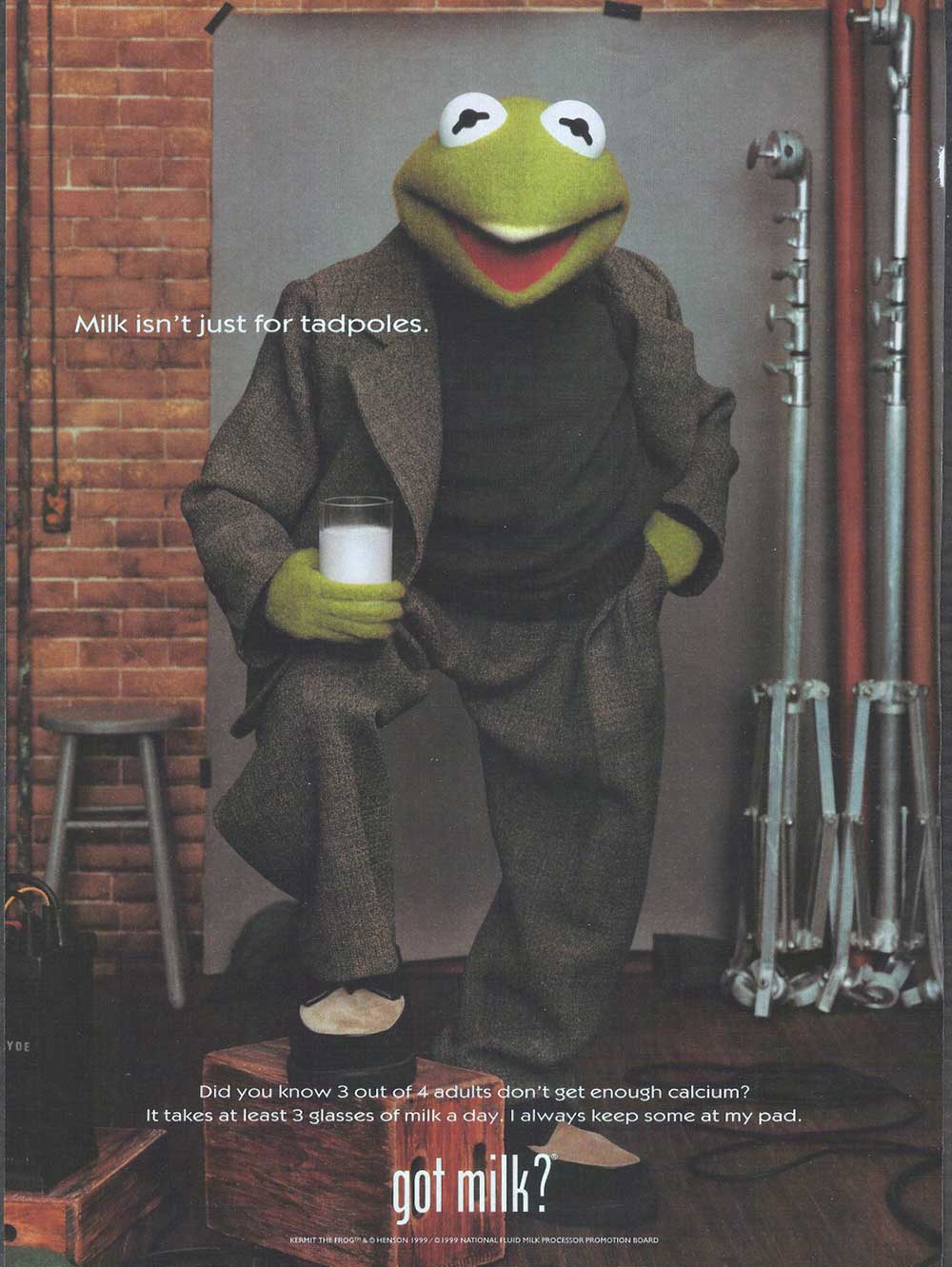 The agency rolled up its sleeves and creative strategy flowed. Witness a history buff with a mouth full of peanut butter who loses $10,000 in a radio contest because he’s run out of milk and can’t say “Aaron Burr.” There’s the minister who stuffs himself with devil’s food cake and then becomes violently upset because the vending machine won’t give up milk.

After the first round of commercials, then Executive Director of the Milk Processing Board, Jeff Manning decided alliance partnerships would be a good idea. The Got Milk? slogan was licensed to Nabisco who manufactured Got Milk? Oreo cookies. General Mills partnered with the campaign to produce commercials featuring Honey-nut Cheerios and Mattel manufactured limited edition Got Milk? Barbie dolls. Topping the list were Muppets Kermit the Frog and Cookie Monster featured in Got Milk? print ads and posters. 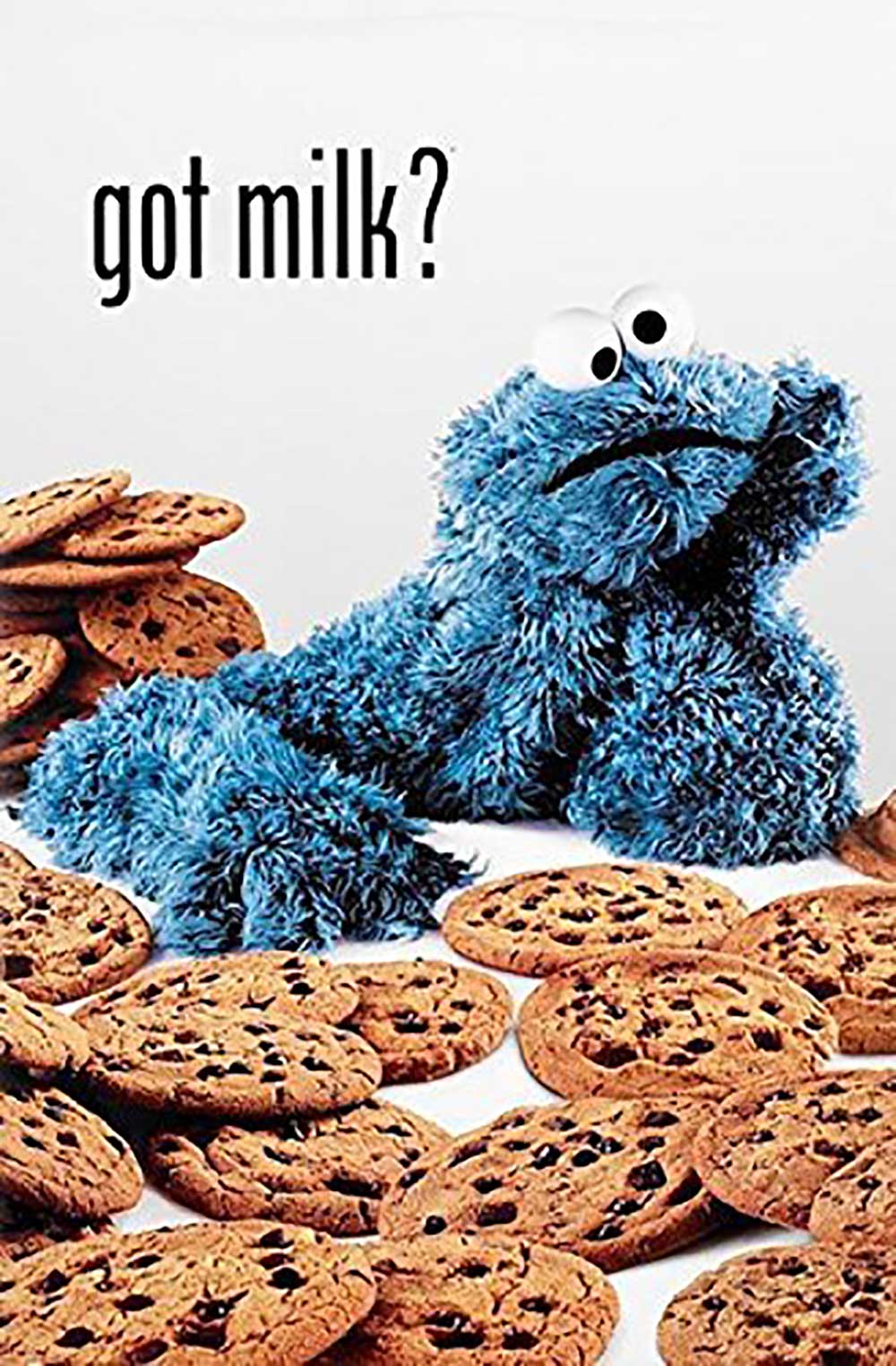 In 1994, celebrities began sporting the now famous milk mustache in print ads. This campaign, jointly funded by U.S. fluid milk processors and American dairy farmers, increased awareness of milk by showcasing more than a hundred celebrities. Consistent use of the Got Milk? positioning statement helped the product regain awareness and firmly positioned it as a top beverage of choice, increasing national sales. 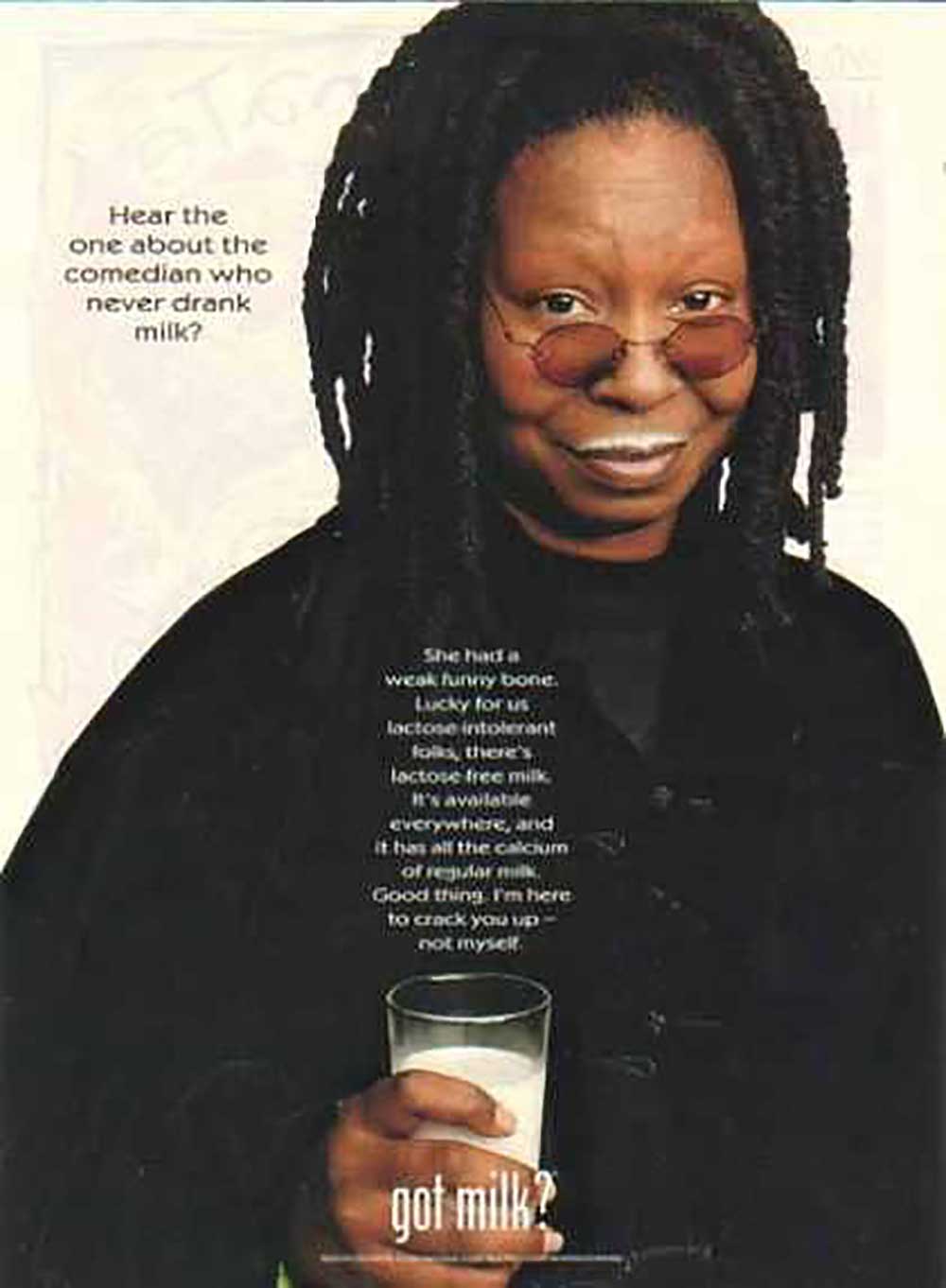 In July 2002, media reported that milk drinking among teenagers increased for the first time in six years. Annual milk consumption per capita among teens in 2001 reached 22 gallons, a 3 percent increase from 2000. This rise signaled a significant upturn, considering that milk consumption by teens has steadily declined for the last two decades. What’s more, milk’s share of the teen market increased from 23.4 percent in 2000 to 25.1 percent in 2001.

Another study comparing the Got Milk? campaign to other popular beverages showed that mega-brands such as Coke, Pepsi, and Budweiser generated less than 17 percent recall of their taglines among consumers. By contrast, Got Milk? was remembered by 50 percent. 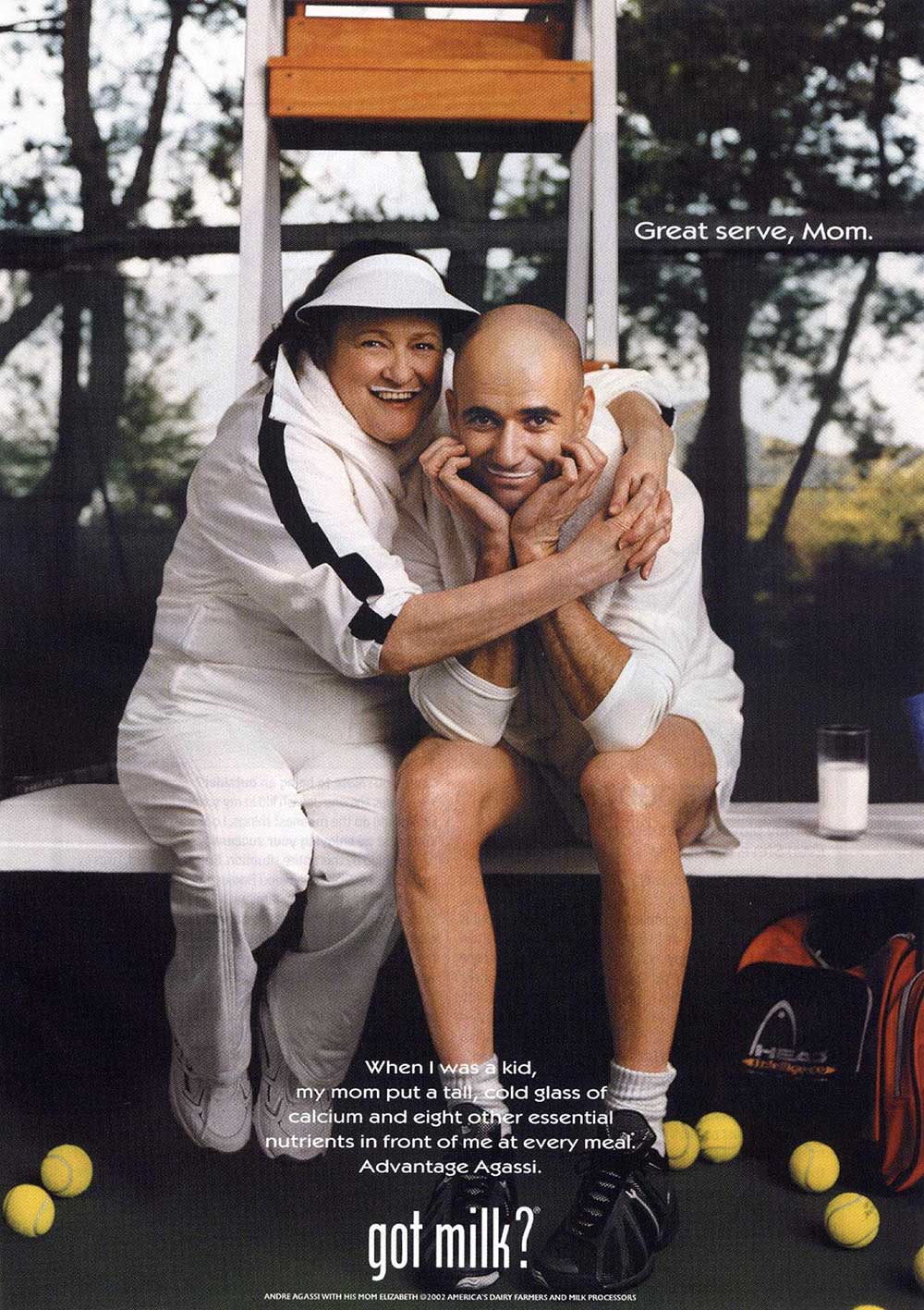 Suffice to say Got Milk? dominated share of voice. In two decades, 70 commercials ran on television in California and nationally, and over 350 milk mustache ads ran in print and on television. On any given day, 80 percent of US consumers came in contact with the question, got milk?

Creativity, consistency, continuity, celebrity endorsement, partnerships, and longevity anchored milk firmly top-of-mind as a beverage of choice. The slogan mentions the product by name. It is short and memorable, has a strong call to action and reinforces the message conveyed in all marketing and communication vehicles. 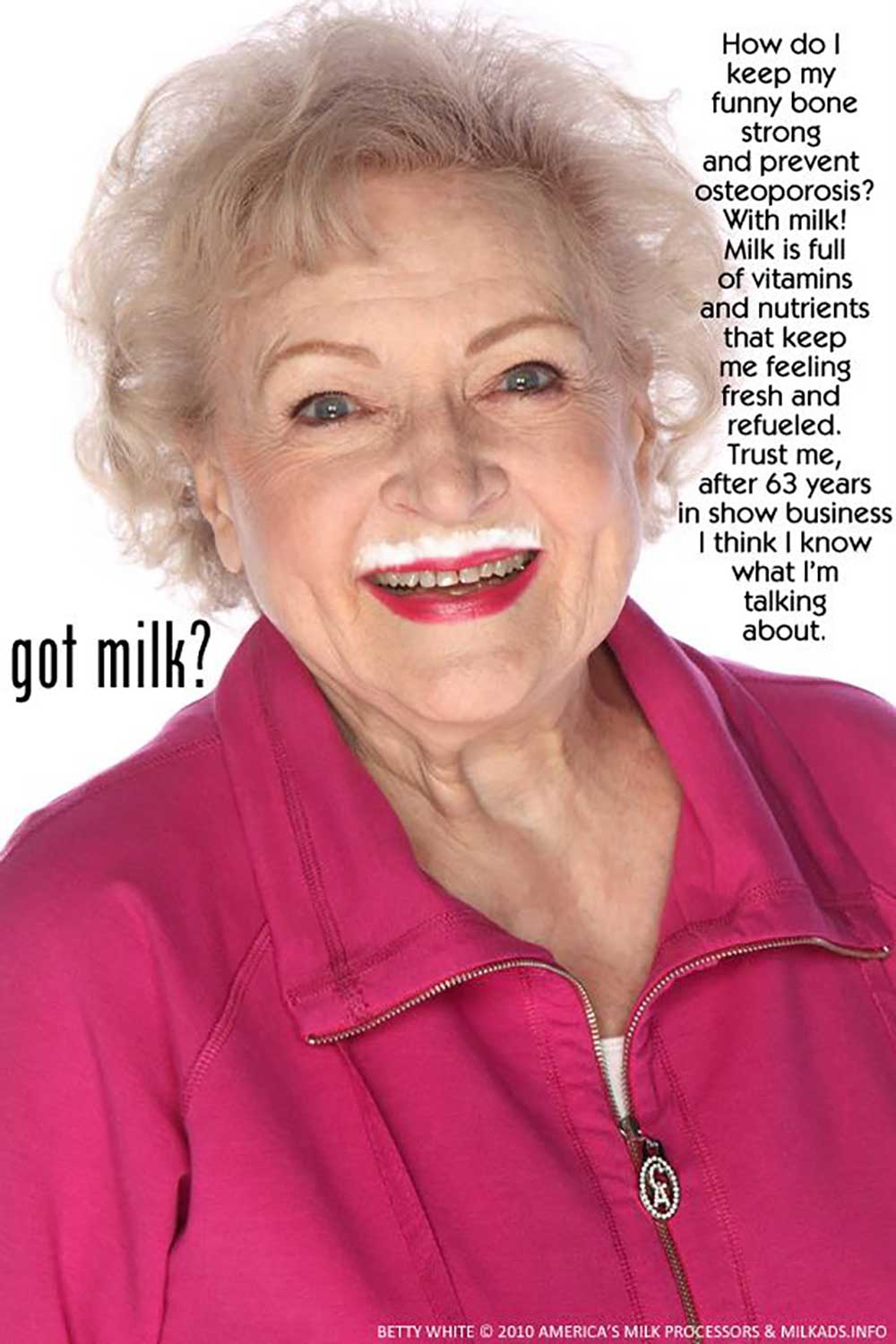 Got Milk? falls on hard times

Influencing a sustainable, long-term shift in behavior through clever, creative marketing is possible. Influencing permanent changes in behavior is closer to a miracle and is rarely the sole domain of marketing. Think drinking and driving, smoking in a public place and recycling. Our behavior permanently shifts because there are consequences.

Milk is subject to changes in the way that people live their life, and over the long-term milk consumption has dropped in part due to healthier food options, fewer boxed cereals for breakfast and a switch to non-dairy milk products. In 2014, Got Milk? was replaced with Milk Life, a campaign focused on encouraging children to drink milk with a social marketing element directed toward hungry children. Will Milk Life influence more milk drinkers? The jury is out.

Note from the Author:
Apologies for the quality of some of the video links included in this article. Production standards have come a long way in 30 years!

Claire Watson consults to global, provincial and national companies on their communication needs. Her expertise encompasses research and measurement, internal and change communication, branding, marketing, public and community relations, advocacy and corporate social responsibility. She has taught extension classes for the University of Regina and developed unique training courses for the Centre for Strategic Communication Excellence. She holds 33 international and 150+ national and provincial Awards of Excellence. In addition, she has received a Lifetime Achievement Award from IABC Regina, Master Communicator designation from IABC Canada and the IABC Chairman’s Award for leadership in the profession.